One of PodTV’s newest comedy podcasts is taking the streaming platform by storm with relatable stories, real conversations, and plenty of laughs.

If you’ve ever wondered where true comedy inspiration strikes, we can tell you: it comes from a hot Daytona hotel room amongst a group of bored friends.

At least, that’s where it all began for famous Florida duo Tom and Dan. The two former radio personalities found their passion one weekend while away with friends, sharing stories and looking for ways to crack a smile. Stuck in a hotel room without air conditioning in Florida, one friend requested they find something better to do with their day than sit around. To this, Dan famously replied, “why ruin a mediocre time?” and from that day, an idea was born.

Today, Tom and Dan attract thousands of weekly listeners and viewers to their podcast, A Mediocre Time with Tom and Dan, which features unscripted conversations about the hosts’ lives, experiences, memories, and general hot topics, all presented with the special brand of humor that Tom and Dan call their own.

Unscripted, uninterrupted, and unbelievably funny, A Mediocre Time with Tom and Dan is the perfect show for anyone interested in letting go of the day’s stress, enjoying the little things, and laughing about the strange idiosyncrasies of life.

Tom and Dan candidly discuss their lives, their families, their community in their native Florida, and more, playing off one another and building towards jokes that will make just about anyone crack a smile.

When we recently sat down with Tom from A Mediocre Time, we asked him about the natural flow of an unscripted comedy show. Did he or Dan have improv or theater backgrounds to prepare them for such an environment? Was it hard to always have to stay in that jokester mindset that makes the show so great?

Tom shared with us “it’s actually a joke on the show, neither of us have a background in improv, it all came from radio.” Tom of course, was referring to the time Tom and Dan both spent as local radio personalities before creating Tom and Dan in 2009. He also told us, “the process is trying to be as unstressed as possible and in a good mood because that affects the quality of the show….sometimes we’re in a [bad] mood and you would never know. We know where to go if there’s a lull and we’ll jump to things…some days are better than the others…our whole career we’ve been trying to get ourselves in the best mood.”

And so far, they’ve been successful. Their combination of real talk, casual conversation, and endless joking has led the podcast to grow an impressive following since its original inception over a decade ago.

Now, with thousands of weekly listeners, the show has expanded to include video, which is available for view on the PodTV app. Speaking to the addition of video, Tom shared with us, “we’ve always kind of done some version of recording ourselves. Most of our listeners came audio only but the ones that like the video really like it. Talk about hardcore, we see them in our chatrooms every day. I mean, the people that are watching are even more engaged [than the people listening].”

So, in other words, if you aren’t yet a part of Tom and Dan’s weekly video audience, you’re missing out! You can download the PodTV app to any smart device, anywhere for free now and start watching A Mediocre Time with Tom and Dan today.
PodTV is available through iOS, Android, and Google Play, and can be found on Roku and the Amazon App Store. Download now to your smartphone, tablet, or smart TV and get access to thousands of hours of exclusive video podcast content like A Mediocre Time with Tom and Dan. 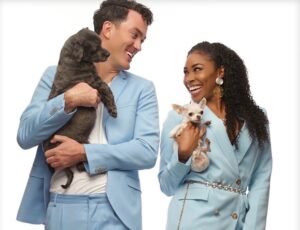